skip to main | skip to sidebar

(Update! Another article on this subject appeared in the May 5, 2005 issue of the Burnside News. It is available as a PDF file at this link: Burnside News Article)

Click here, then type Bayers Lake Mystery in the Title box, and press search, to access full articleAn article by Kim Moar has been printed on p. 3 of the Monday, March 21, 2005 edition of the The Daily News (Halifax, NS, Canada) titled Bayers Lake mystery wall baffles archeology buffs. It reports on efforts to form a non-profit group to help preserve this site, and others of archeological import in this Province. Quoting from the article:
One such site is a so-called “mystery wall” discovered several years ago during an expansion of the Bayers Lake Business Park. Extending more than 200 metres and measuring as high as two metres, the stone wall is baffling many historians.
“Nobody is quite certain what it is … We can’t find any records,” [Jeff] Turner said [spokesman for the new Archeological Land Trust of Nova Scotia].
While no one knows for sure when it was built, archeological experts believe it was likely constructed between 1749, when Halifax [was] founded, and the early 1800s. The site also includes the footprint of a large, five-sided building, with compartments and an unusual set of stone steps seemingly leading nowhere.
While some have suggested it’s a military ruin, there’s no record of that, either.
“The military history of Halifax is really well documented, and this thing does not show up,” Turner said.
David Christianson, a curator of archeology with the Nova Scotia Museum, said yesterday while many people believe the wall and structures are the work of soldiers, others have more romanticized ideas about who built it.
Some believe it was built for Prince Henry Sinclair in 1398 during a legendary search for the Holy Grail. Other[s] say it is evidence of an advanced, pre-Columbian civilization.
Christianson said while none of the artifacts found at the site so far would suggest that early a beginning, there’s been very little archeological work done at the site to prove — or disprove — any possibility.
This site is also the continuing focus of much of my personal research. It is actually only one part of a much larger context of anomalous stonework and earthwork in the vicinity. A careful study of early French documents going all the way back to 1595 makes it quite unlikely to have been of French colonial origin either. I’ve attached a few of my own photos as illustrations of the Bayers Lake “Mystery” Walls. (TJD)


All Copyrights © are acknowledged.
Material reproduced here is for educational and research purposes only. 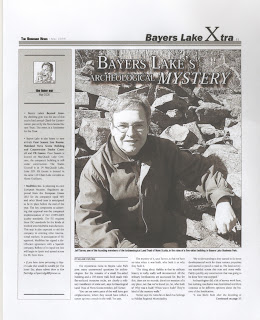 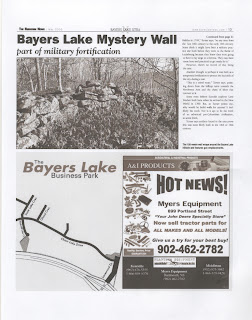 Jeff Turner, one of the founding members of the Archaeological Land Trust of Nova Scotia, in the ruins of a fi ve-sided building in Bayers Lake Business Park.
The mysterious ruins in Bayers Lake Park pose many unanswered questions for archaeologists.But the remains of a small five-sided building and a 150-metre wall, both made withfl at-surfaced ironstone rocks, are clearly a militaryinstallation of some sort, says ArchaeologicalLand Trust of Nova Scotia member, Jeff Turner.“You can see some parts of the wall have gunemplacements, where they would have rolled acanon up into a notch in the wall,” he says.The mystery of it, says Turner, is that we haveno idea when it was built, who built it or whythey built it.“The thing about Halifax is that its militaryhistory is really, really well documented. All themilitary fortifi cations are accounted for. But forthis, there are no records, there’s no mention of itany place, not that we’ve found yet. So, who builtit? Why was it built? When was it built? They’rekind of the mystery walls.”Turner says the ruins lie on land that belongsto Halifax Regional Municipality.“My understanding is they started to do somedevelopmental work for these various propertiesand started to punch a road in. The land surveyorsstumbled across this ruin and stone walls.Fairly quickly, any construction that was going tobe done here was stopped.”Archaeologists did a bit of survey work here,but nothing conclusive was determined and therecontinue to be different opinions about the historyof the fortifi cation.“It was likely built after the founding ofContinued on page 13 Continued from page 11Halifax in 1749,” Turner says, “so any time fromthe late 18th century to the early 19th century.Some think it might have been a military practicesite built before they went to the Battle ofLouisbourg because they knew they were goingto have to lay siege to a fortress. They may havecome here and practiced to get ready for it.”However, there’s no record of that beingthe case.Another thought is perhaps it was built as atemporary fortifi cation to protect the backside ofthe city during a war.“This is a travel route,” Turner says, pointingdown from the hilltop ruins towards theNorthwest Arm and the chain of lakes thatconnect to it.Some even believe Scottish explorer LordSinclair built here when he arrived in the NewWorld in 1390. But, as Turner points out,why would he build walls for canons? It isn’tlikely his work. Nor is it apt to be the workof an advanced pre-Columbian civilization,as some think.Turner says artifacts found in the area provethis was most likely built in the 18th or 19thcentury.The 150-metre wall wraps around the Bayers Lakehillside and features gun emplacements. BY MELANIE FURLONG
Posted by Bayers Walls at 10:29 AM 45 comments: Links to this post

Posted by Bayers Walls at 8:58 AM No comments: Links to this post

Posted by Bayers Walls at 8:46 AM No comments: Links to this post

Interesting Photo's at the Mystery walls 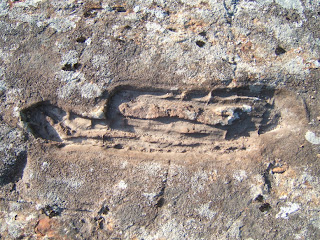 A mystery craving in the bedrock 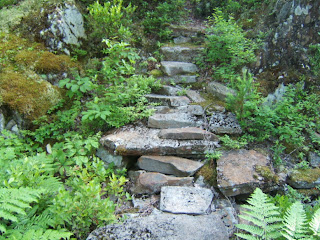 Mystery stairs leading to the plateau rock. Could it be an Observatory area??

Posted by Bayers Walls at 8:25 AM 11 comments: Links to this post 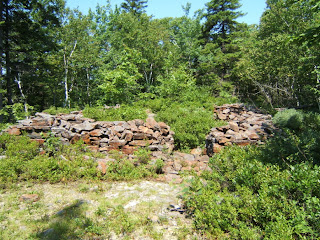 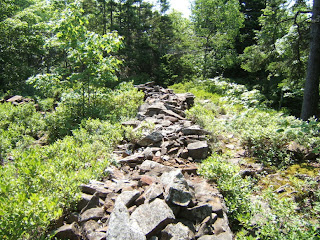 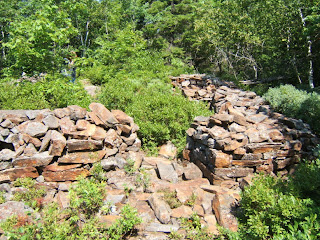 Posted by Bayers Walls at 1:19 PM No comments: Links to this post